This is wonderful Clan Guthrie content that we reserve for our Members Only. If you'd like to become a member and gain access to this and many more wonderful articles, please be sure to join us here!
Forgot Password

What ended up happening was we actually did get enough money and commitments, FOGC made an offer that would be paid over time.

The seller decided that they would not accept payments over a ten year period of time which, with the tax structure in Scotland, would have been most beneficial to the seller.  They would ONLY accept a slightly smaller amount paid now with cash up front.

In late 1982 we learned that Christie’s would be handling an auction of the “Property of Mrs. David Guthrie” including: pictures, furniture, objects of art, silver, books, carpets, ceramics, arms and armour, furnishings, and outside effects. The auction was to be held at the castle on May 9 and 10 of 1983. So, what the FOGC Board of Directors did at that point was to convert the FOGC focus to acquiring Guthrie historical artifacts . We decided to go to Scotland as a team and bid on items at the Christie’s auction. We gathered a few very interested, dedicated people that were members of Friends of Guthrie Castle. They hopped on a plane — and serving as representatives of FOGC  — attended the Christie’s sale. I believe that there were 17 in our group, led by William N. Guthrie of Winnetka, IL. The team consisted of Lou Guthrie, Maryon Guthrie Noble (whose knowledge and experience at auctions was invaluable), Brian G. Wink, Norman and Florence Guthrie Glime, Glennys Guthrie Gehring, Dr. Thomas Guthrie, Jean Guthrie, and a few more.

Christie’s came up from London, ran an inventory, took photographs of all the items, built-out a catalog, and produced Lot Numbers on the catalog items. In those catalogs were photos and descriptions that the FOGC members sat down in the Royal Hotel in Forfar and, over drinks, decided what we were going to bid on for Friends of Guthrie Castle given the amount of money that we had. Then, we began identifying which items might have value for the sake of Guthrie heritage (not just for things to have that were old). We tried to make those items the key focal point. 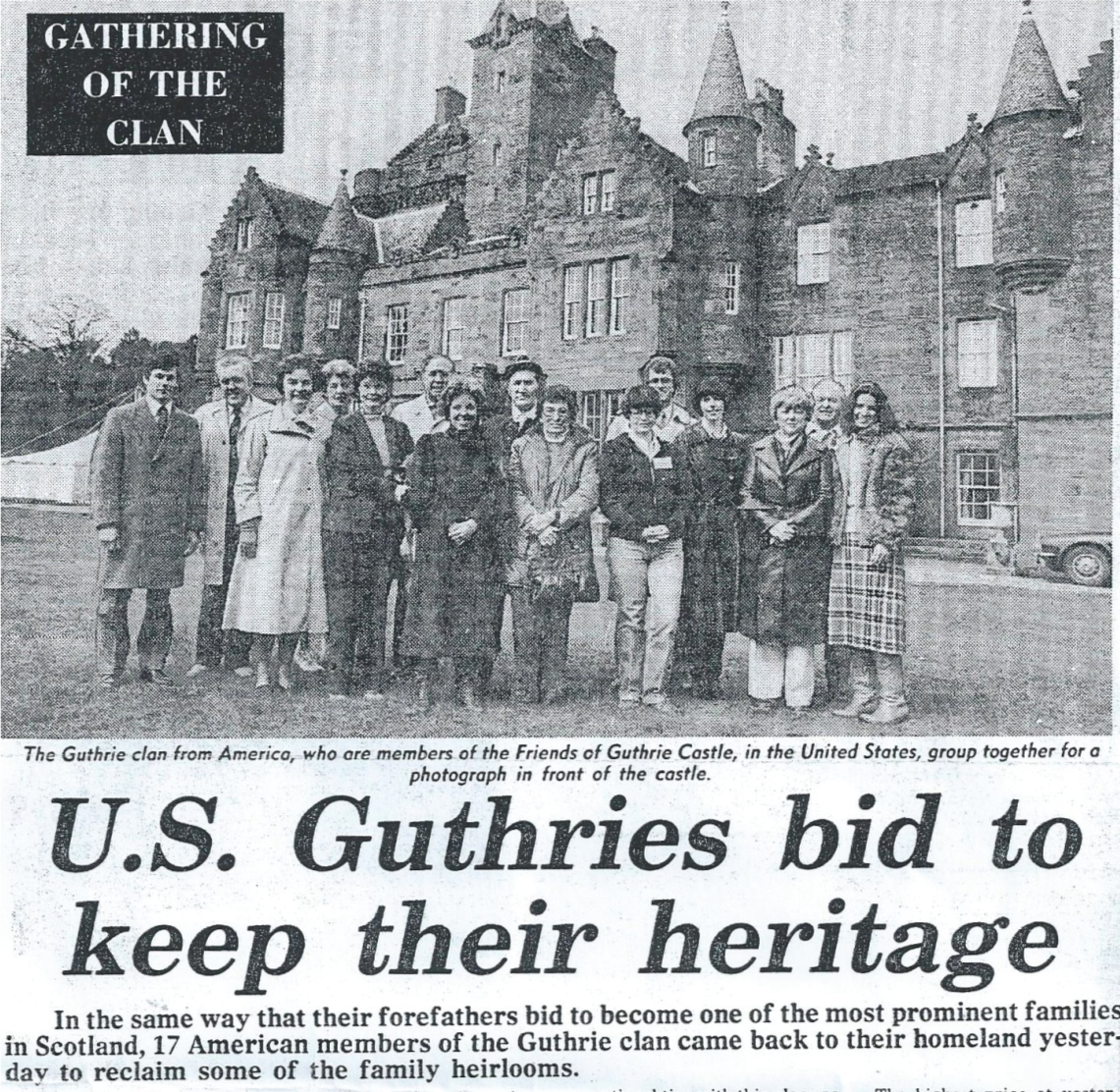 When we went to the auction, we all registered, I was actually in charge of the bidding team and we were issued the number “81" for our bid paddle. This meant that we weren’t the first by any means — there were a lot of bidders There were bidders on location at the sale and there were bidders that were remote and bid on the phone, There were 27 historical organizations and museums that were bidding on items. Some of the Lots that we considered significant created a bit of a bidding war. We also decided that some of the items would be bid upon by the individuals so that they would be held by Guthries.  In case we were to acquire the castle in the future, these items could be "on loan" to the castle to display artifacts of heritage. I know that I bought quite a few things, items for me, purchased items on behalf of my parents, and other purchased family members at their request.

As I remember, it was a very cold day. We went and bid against all the organizations, museums, and collectors. We were actually very successful in acquiring many of the bids and got almost every single thing that we wanted for FOGC. After the sale, we all went out for dinner and drinks — and of course, Scotch — and celebrated our success.

The next step was to figure out how to ship our personal purchases to the U.S. and how to take care of the items that FOGC owned —  but wanted to keep in Scotland. Maryon Guthrie Noble knew the “ropes”. She stepped up and arranged for packing and shipping to the states for most of the personally purchased items, including the Guthrie China — the set was to be 'pieced out' to many contributing Guthries.

FOGC had an arrangement with France and Clare Smoor from 1984 until December of 2015. The paintings were housed at Gagie House or Gagie Castle (the Guthrie Dower Castle). The good news is that now the paintings will be housed, appreciated, and seen by many more Guthries in the U.S.  The bad news is that they will no longer be in their homeland. Their new home at Arlo Guthrie’s "The Guthrie Center" in Great Barrington, MA should give all U.S. Guthries the opportunity to see the collection of 10 paintings, the breast plates and chair, Thank you Arlo — you’ve been a big supporter since 1981 when you went on tour to raise money to try to purchase the castle. We all appreciate you!

The Quaich Scotland's Cup of Friendship The Quaich became the traditional toasting cup of welcome in Scotland or ...
Read More → 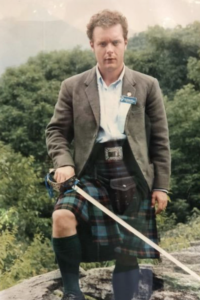